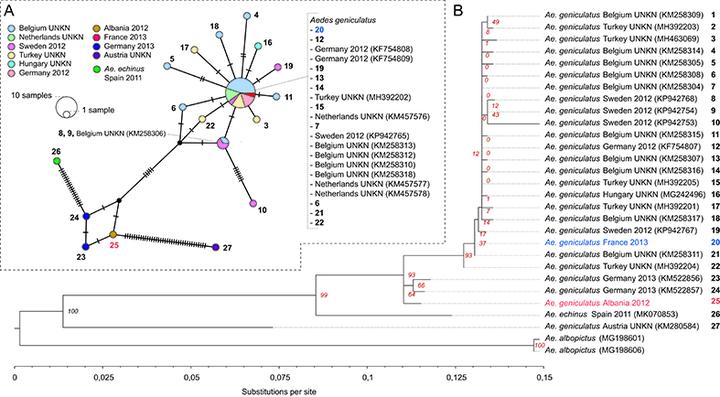 Europe is the world’s leading tourism destination and is receiving every year travellers from areas with active arbovirus transmission. There is thus a threat of mosquito-borne virus emergence in Europe due to the presence of the invasive mosquito vector Aedes albopictus. Little attention has been paid about the possible role of indigenous mosquito species as vectors of emerging arboviruses. Here, we assessed the vector competence dynamic of Aedes geniculatus, a European anthropophilic mosquito species, for chikungunya virus (CHIKV) in comparison with an European population of Ae. albopictus. We revealed that Ae. geniculatus is highly susceptible to CHIKV infection and could transmit the virus. By specifically exploring the vector competence dynamic in both mosquito species, we revealed that the cumulative distribution of CHIKV incubation period in Ae. geniculatus was delayed by several days as compared to Ae. albopictus. Our results strengthen the importance of considering indigenous species as potential vectors for emerging arboviruses. They also revealed the importance of considering variation in arbovirus dissemination or transmission dynamics in mosquitoes when performing vector competence assays. We will discuss the implications of our results on a CHIKV outbreak dynamic in a theoretical framework.